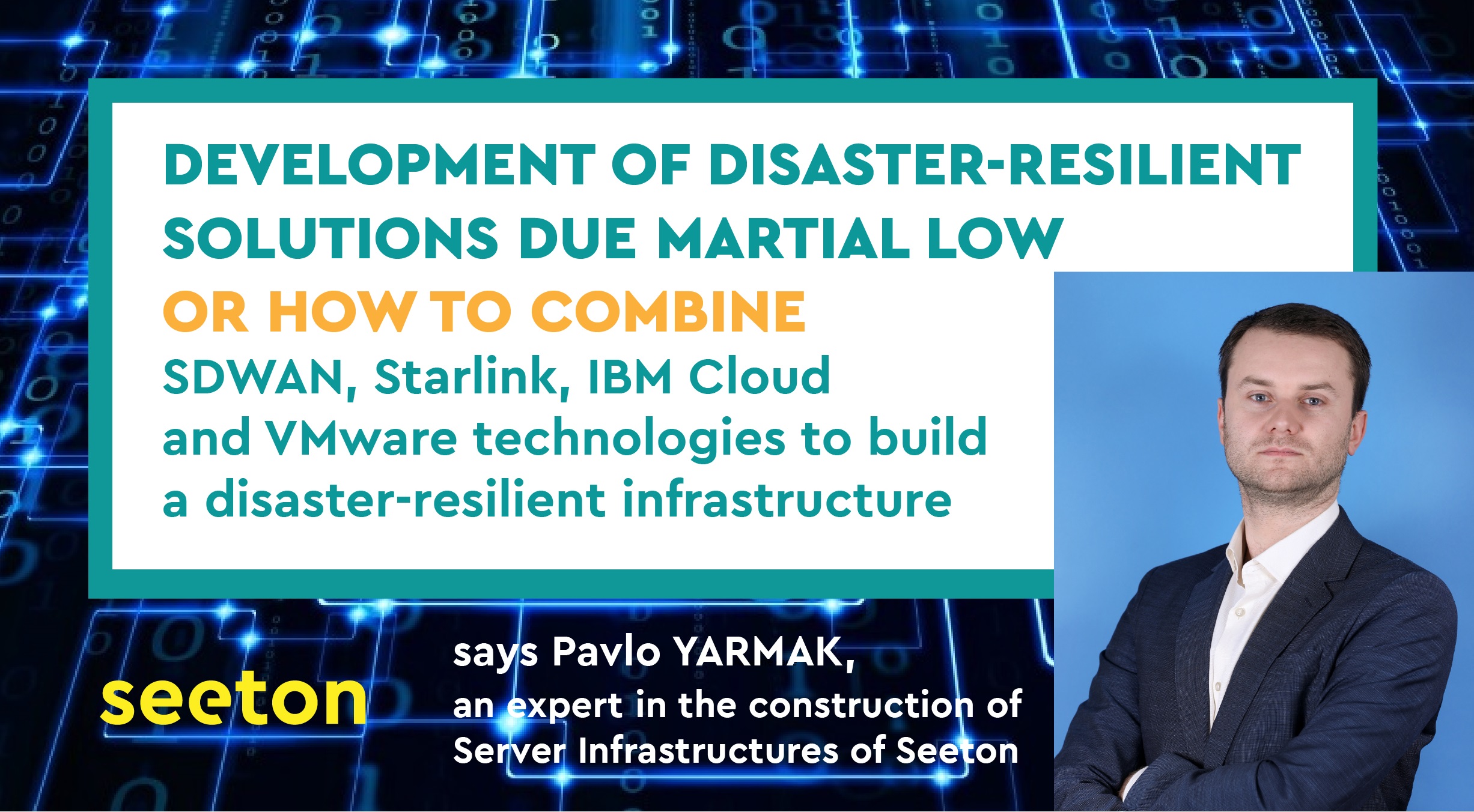 The war brought changes to all spheres of activity without exception, and for any Business Manager, the need to ensure the continuity of business processes has added to the problem of setting up remote work. As a result, the following questions became relevant:

We asked Pavlo Yarmak, an expert in the construction of Server Infrastructures of Seeton, to share his improvements in this matter using the example of a real implemented project:

“With each day of the war comes the understanding that it is necessary to adapt to the changes that have taken place and try to do everything to contribute to our victory. At first, the actions were chaotic, but as we received more and more similar requests, as we searched for solutions to the problems, the necessary solution architecture began to emerge. Considering the fact that the vast majority of companies use VMware products in their infrastructure, the basis was the need to integrate the ground infrastructure of VMware with the VMware infrastructure of a Cloud provider located outside of Ukraine. Several Cloud solutions were tested, but the IBM services proved were the most attractive. In the process of analysis, the following capabilities of IBM Cloud compared to other providers determined the strategic choice of partnership:

Subsequently, within one week, our team prepared the infrastructure in the IBM Cloud for further integration with the existing ground infrastructure in Ukraine using the Site-to-Site VPN functionality between VMware NSX-T in the Cloud and Cisco ASA in the ground Data Center.

A few days later, we had to solve the problem with the communication channels, which we could not find promptly. The idea appeared to use SDWAN technology in a slightly unconventional way. We knew that the customer already had more than a dozen Starlink sets at that time. Therefore, we proposed and tested the following solution: the simultaneous operation of several Starlink dishes, an LTE modem from Vodafone, a terrestrial Internet communication channel with a speed of up to 100 Mb/s and a SDWAN solution acting as an aggregator of all available channels into one secure channel with high bandwidth. At the same time, a virtual SDWAN Edge was deployed in the IBM Cloud and a Point-to-Point connection was built between the IBM Cloud and the ground Data Center.

Using the Software of the Backup system, a policy was set to create backup copies first in the Storage of the ground Data Center, and after a day, automatic replication to Object Storage in IBM Cloud with the possibility of further data recovery already in the dedicated virtual infrastructure of the Cloud.

At the moment, in order to optimize user access to the resulting hybrid infrastructure, an increase in the number of SDWAN gateways and their distribution among divisions on the territory of Ukraine is being considered.”

Seeton team is always in touch to ensure the continuity of your business: Sales@seeton.pro